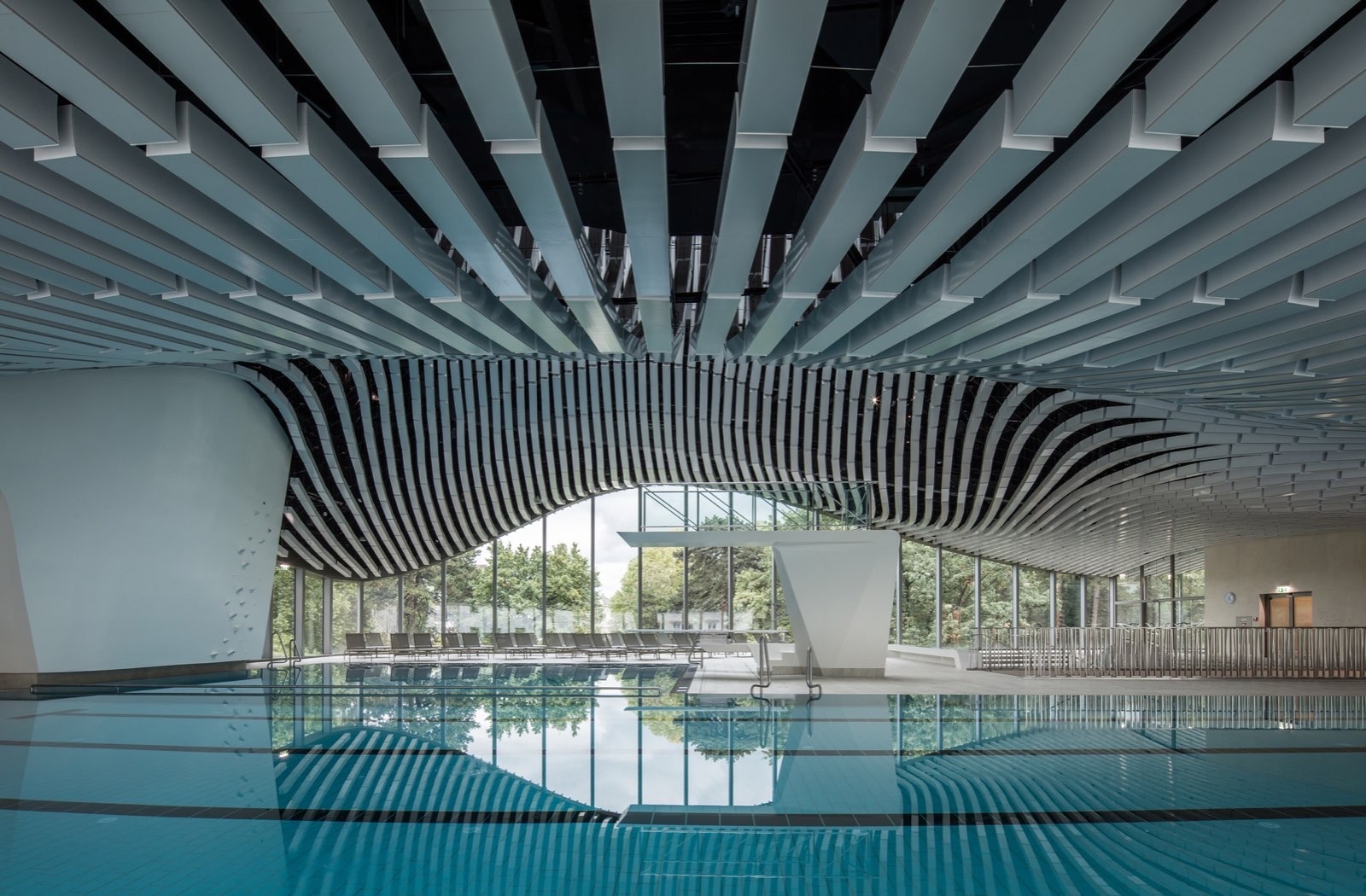 Going to the sauna and swimming in an architecturally stimulating atmosphere – this is possible in the new Paracelsus Bad & Kurhaus in Salzburg. Designed by the Viennese architectural firm Berger+Parkkinen, the redesigned new building is modern, puristic and has views of the surrounding area. During construction special emphasis was placed on the choice of materials. The tiles of Tonality GmbH from Weroth fit harmoniously into the overall design concept. The terracotta elements, which were developed and customised especially for this new building, form a curved wave ceiling which extends over the pool landscape like a canopy of heaven.

Since the end of 2019, Salzburg has been home to the Paracelsus Bad & Kurhaus, a new, modern bathing, spa and sauna landscape in the middle of the city. The five-storey building was erected in the immediate vicinity of the Salzach River to the west and the Mirabell Castle, which was built in the 17th century, to the south. The new building carries on the history of this place uniquely: After all, the so-called “Actien-Badehaus” was located at the same spot since 1868 already. The “Paracelsusbad” in the style of the 1950s, which was built as a successor building after the war by architect Josef Havranek, has now been replaced by the new building after an operating period of around 60 years.

The new Paracelsus Bad & Kurhaus was built according to plans of the architectural firm Berger+Parkkinen from Vienna. It is characterised in particular by its compact structure. The facade is made of vertical terracotta lamellar elements, which are interrupted on the third floor by a curved floor-to-ceiling strip of light. Behind the glass surfaces lies the bathing landscape with a sports, diving and toddler pool, a relaxation pool as well as lounging areas. From there, visitors can enjoy an impressive panoramic view of Salzburg and the adjoining spa gardens. While the Kurhaus, the changing rooms and the entrance are located on the ground floors, the gastronomic facilities and the sauna area are located above the swimming hall. An outdoor pool with views of the city complements the wellness offering.

The undulating ceiling above the bathing area is of unique charm. It consists of hundreds of Tonality ceiling tiles, which cover an area of approximately 980 square metres. The smoothly glazed terracotta bodies have a width of 200 millimetres and a length of 284 to 1.164 millimetres. In terms of colour, the terracotta tiles with their white glossy surface harmonise with the overall colour concept of the bathing landscape, which is characterised by white and sand-brown surfaces found on the walls and floors. The only colour accent is provided by the illuminated swimming pools which make the wave ceiling appear slightly turquoise in some areas so that the ceiling conveys an even stronger sense of a sky.

The ceiling tiles used were created from high-quality, sinterable clay from the Westerwald region using the TONALITY firing process. During the production process, the clay is finely processed and compressed under very high-pressure. Subsequently, the terracotta bodies are gently dried. A special coating gives the tiles their unique appearance. “The heat-glazing technique ensures a very good fusion between the glazing as a visible outer layer and the terracotta body“, explains Wolfgang Häußler, Managing Director for Sales and Corporate Development of Tonality GmbH. Finally, the tiles are fired at temperatures between 1.180 and 1.200 degrees Celsius.

The unique surface quality of the terracotta tiles was the main reason for using them. “The elegant, natural look of the tiles contributes to the pleasant atmosphere in the pool and spa facility – together with the other materials used, they ensure a harmonious overall concept”, said the architects Alfred Berger and Tiina Parkkinen. The tiles also have the additional advantage that they are resistant to temperature changes, are waterproof and resistant to acids and alkalis. Thus, they are also fully suitable for the swimming pool area. Additionally, the colour, UV and ageing resistance ensure that the elements retain their appearance throughout their entire product life and that no costly maintenance work is required.

Furthermore, the Tonality tiles have a low dead weight and are therefore relatively light. This advantage had a particularly positive effect on the dimensioning of the substructure which was constructed as a suspended ceiling. In this case, every aluminium carrier box is equipped with a Tonality element. The entire structure is attached to or suspended from wire ropes. The substructure was planned with safety aspects in mind. Thus, the tiles have a special anchoring structure on their rear sides: If a tile breaks due to external influences like ball throw or impact, this structure prevents larger terracotta parts from coming loose and falling. Instead, the larger fragments of the terracotta tile get stuck in the holding structure. This way, safety is also taken into account in the pool facility.

“The ceiling design on the bathing level of the Paracelsus Bad & Kurhaus is extraordinary. With Tonality, we have found a manufacturer who has the terracotta know-how that is required to think and produce outside of the norm. This allowed us to realize our vision of a bathing heaven”, said the architects.